The grim reaper may soon be coming for the Adobe mobile Flash support, and the fathers don’t even care. Adobe reps announced on June 29, 2012, which is coincidentally the birthday of the first iPhone, that Flash will die. August 15 this year marks the last of the new installations of flash for Android’s latest and greatest Jelly Bean 4.1, as well as other non-certified devices. 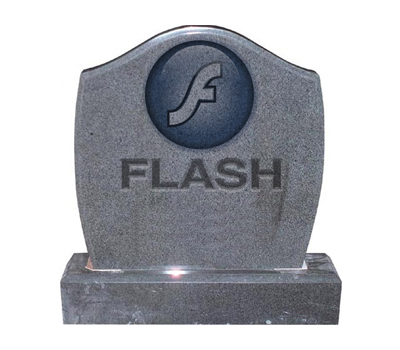 According to Adobe, the plugin has increasingly become incompatible to the operating system. We remember the same tune sung by previous reps a few months ago, that support will definitely drop for Ice Cream Sandwich, Android 4.0. Still, a few protests later, Adobe finally released a working plugin that was able to cater to users who bought new Ice Cream Sandwich phones, as well as to those who updated from previous versions. Still, it seems it was just a step prolonging the inevitable.

This is further solidified by Adobe’s new stand that it will also stop certifying new devices to be compatible with flash. It seems the developers from Adobe are tired of their work with Mobile Flash and are now calling quits. The company is moving on to other things. They are not even planning to attempt to save the popular mobile plugin that Android users clamor for.

Adobe flash won’t entirely be dead. After all, who knows how many devices will run 4.1 in the first year, and how much it will even be adopted. There are still tons of devices in the wild running on Froyo, Gingerbread, Honeycomb and some ICS. These devices which were able to previously install Flash will be able to keep their Flash plugin until the moment they upgrade to Android Jelly Bean.

Fear not. The World Wide Web is starting to catch the drift, and is slowly moving on to HTML5. Mobile Flash may eventually fade from everyone’s mind, once the web starts to get rid of it all together. Some say that it is about time, and that less opinionated Android users are the only ones that are even clamoring for the support.

For those Android users who will eventually upgrade to Jelly Bean, there is still some hope. A little bit of tweaking and know-how will allow you to install the Flash plugin to your new OS. Still, this is just installing, there is much to say about compatibility and stability, for which Adobe says they will no longer be responsible for.

Will this be the final nail in the coffin for Mobile Flash? Or will Adobe eat their words again and provide support for Android Jelly Bean? Do you even want to keep Flash on the mobile space or is HTML5 your new best friend? All I can say is that technology and people are amazing. If we lose something, something better and something new will eventually rise.